Now, this is interesting!! An ear buds for earphone...Doesn't that look like wearing earrings? The husband and wife team Jonathan and Kate Hall are the ones to create this cool & funky accessory. With teenagers trying to different themselves, a personalize ear buds might be a good idea!
Posted by skylet at 8:26 PM 2 comments: 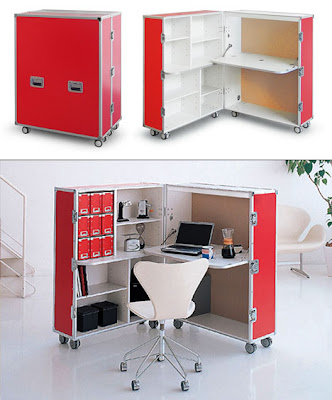 Everything is mobile nowadays, mobile phone, mobile TV, mobile movie player and how about this mobile working desk with filing functions included!!
Posted by skylet at 6:57 PM No comments:

Everyday an estimated number of 118 babies will be born and 51 people will die in Singapore. While this figure might not seem to be interesting but what we don’t realize is that we’re once and going to be part of this statistics.

I think in our culture most people find it a taboo to talk about death. They rather spend their lives worrying about absurdities; talking about the weather; postponing their dreams and slave themselves to society’s expectation. They complain a lot but are afraid to take action. They want everything to change but yet they are reluctant to make changes.

Death is unavoidable. When birth arises, death follows. Everyday we are dying and getting closer to our day of demise. Instead of avoiding talking about death or be frightened by death, let’s all confirm this nature of life, because all of us, sooner or later are going to die. And only those who accept this fact are prepared for life.

P/S: I delicate this blog to my godson, Alfonso Yew, may you find courage in the darkness to pursue the light and live each day as if it’s your very last day.
Posted by skylet at 7:54 PM No comments: 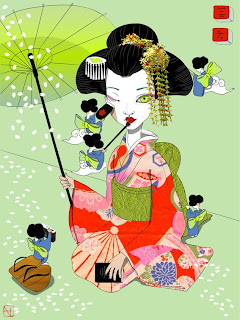 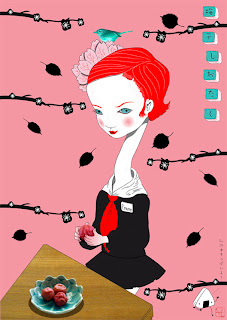 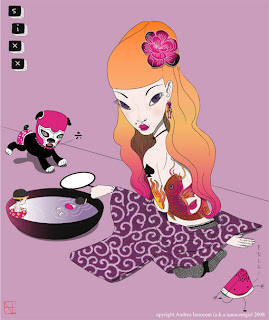 An illustrator living and working in Melbourne, Australia and a self-confessed nipponophile. There is no denying the influence of her exposure to Japanese culture had on her work. Themes range from investigations into the cult of otaku to traditional Japanese folk tales and Japanese textiles and their meanings.
Posted by skylet at 8:31 PM 1 comment: 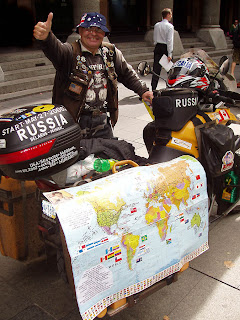 Yesterday, I met a man. Not your average kind of man. He is deaf, mute and has travelled Three-quarters of the globe, Six continents & 47 countries.

All done with one beat-up BMW bike and a whole lot of quiet enthusiasms.

I saw him outside the peace centre besides a renovated shop where he displayed most of the photos on the countries he had traveled. Not to mention, the 2 big luggages that hang on both sides of his motorbike.

He explains his ambition with a white laminated sheet of A4 paper. It reads: 'I want to enter the Guinness Book of World Records as the only deaf and mute who has travelled all of Europe, Africa, Americas, Australia and Asia on a motorcycle.' What is more astonishing is that he is not subjected to his physical conditions in order to fulfill his dreams.

Now, that inspires me to travel. If traveling opens up your mind and be liberated then I’m not afraid to detach myself from my wealth & possessions. I’m not afraid to make changes. And I’ve no regrets. You see changes are constant and they are here to stay.

Sometimes, in life, we tend to take the easiest way out. What we don’t realize is that challenges bring growth, only by taking the road that few people travelled can suggest the difference between ordinary and extraordinary. I’m not afraid to face the unknown. For all you know, I’m able to make my own changes and I'm accountable for it.

Mr Yarets' journey can be tracked on http://www.yarets.com./index_eng.html
Posted by skylet at 7:12 PM No comments:

Before 1951, Tibet is an independent country. The country had its own administration and the 14th Dalai Lama was served as a spiritual leader. However, independence didn't last for long. When the Communist Party in China gained control and formed the People’s Republic of China (PRC) in 1949. The PRC propagate "People’s Liberation Army must liberate all Chinese territories" and one of the territories is Tibet. Thus, the Tibetan Government wrote to China’s leader, Mao Zedong, suggesting talks to resolve all boundary feuds. This document was also delivered to the governments of India, Great Britain and the United States, and even though these countries were and are fully against the expansion of Communism, they still supported Tibet’s negotiations with the PRC in order to prevent military action.

During the talks, the PRC’s ambassador insisted that Tibet agree to a two-point proposal, which said that henceforth, China would control Tibet’s national defense and that Tibet would be acknowledged as an official part of China. The Tibetan Government refused to comply with this and the discussions were terminated.

On October 7, 1950, the enemy attacked the Tibetan frontier in six places simultaneously." These forty thousand soldiers from China’s Red Army easily overwhelmed Tibet’s small territorial army of eight thousand in merely two days, killing more than half of Tibet’s troops and detaining the Regional Governor. In 1959, the 14th Dalai Lama was forced into exile in India after the Chinese military occupation of Tibet.

If the matter of Tibet's sovereignty is murky, the question about the PRC's treatment of Tibetans is all too clear. After invading Tibet in 1950, the Chinese communists killed over one million Tibetans, destroyed over 6,000 monasteries. A quarter of a million Chinese troops remain stationed in Tibet. What's more, currently in Tibet, any "Tibetan culture, religion, and national identity are considered a threat" to China.

Regardless, where is the justice or who started the riot? One thing we can be sure is that peace can never be achieved through violence...

Posted by skylet at 7:00 AM No comments: 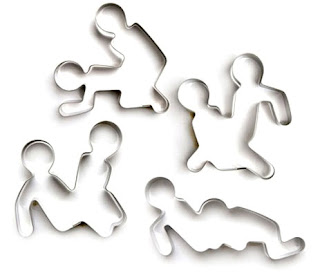 Who say sex and cookie cutter don't go well together? That's the way to spice things up in the kitchen!!!
Posted by skylet at 1:07 AM No comments:

It’s not the title of Madonna’s Confession Tour.

Everyone has a secret, their own dirty little secret, if not, many secrets. We keep our secret from preventing our closest friends or family from being hurt. Sometimes we hide our secret because it’s too embarrassing. We conceal ourselves by having secret. We keep secret from people to know us better. Most of the time, we hide our secret from people just to protect ourselves. In another words, we’re not truthful. We hide and lie. However, as times goes by, you’ll realize when the secret is out, a new kind of freedom had been found. What exactly is my secret? It’s for me to know and for you to find out…
Posted by skylet at 9:53 PM No comments: 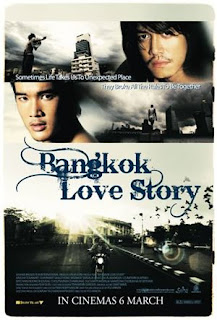 Last Oct, I saw the review of this arty Thai film. Since then, I'm deeply attracted by the theme song sang by Calories Blah Blah. Yes, that's the name of the Thai artiste. As I begin to love the song even more, I thought the chances of seeing this movie in Singapore is minuscule. However, recently Golden Village Plaza & Vivo brought in this movie to Singapore. Then I realize it's such a depressing movie. (Think Broke Back Mountain but not as good)

Few good things about this movie is that it talks about discrimination and stigmatisation in AIDs from our society. Also, LOVE that transcends more than just sexual preferences. I mean to wait for someone you love for over 40 years. Same goes for the movie, The Leap Years. What are the odds? Is it a silly or noble thing to do? That answer I'll leave it to individual. For me personally, It's good to know some people do spent their life waiting for someone they love, it might sound nice and devoted but it's not an ordinary thing to do.

Nonetheless, if you love the theme song, check out the video below.

Posted by skylet at 7:15 PM No comments: 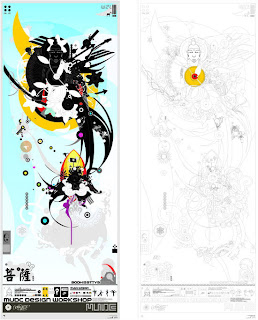 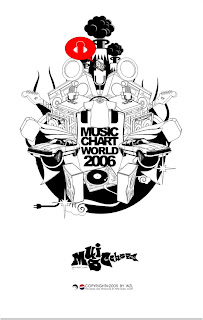 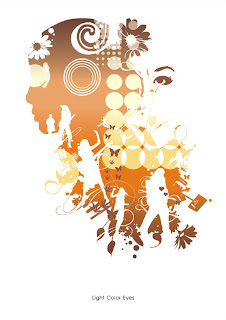 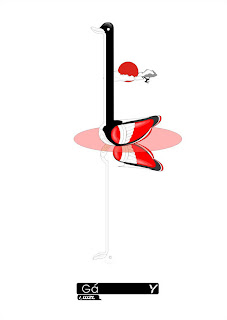 I came across this Bejing illustrator that did a lot of intricate and fascinating illustrations. Some which juxtaposes Buddha image makes the illustration with a strong east mixed west fusion. Enjoy!
Posted by skylet at 4:43 AM No comments:

So what you gonna do?

For those who loves the suspense and mystery of Da Vinci code, you might have already figured out that my nick skylet, hidden my name Kyle in between S and T, s KYLE t. Don’t ask me what S & T stands for, I don’t know, how corny you may think...but I guess we all do uninteresting corny things just to make our life a little extraordinary. As a struggling designer, there is nothing I can complain about. I’ve always believed, probably because of my mother’s assurances, that I could accomplish anything that I want. I can be who I want to be, without any questioning and doubt, she always feel safe with the decision that I made even at the time when becoming a designer seem like a job of futile prospects. I might not be the richest person in the world but I embrace challenges that are ahead of me. I wake up everyday with a certain amount of happiness and the beliefs I have together with tremendous amount of inquisitiveness and curiosity in the world that I live in. That’s me, my name is Kyle. Just when you think that you've known me completely, out comes an entirely new side of my personality. My dynamism allows me to experiment with different personas when it comes with facing different situation, creating amusing and possibly uplifting or unexpected results. Thus, don't judge me cause I'm always and never the same. Maybe S is for Singapore and T is for Thailand where I'm always struggle to be in...